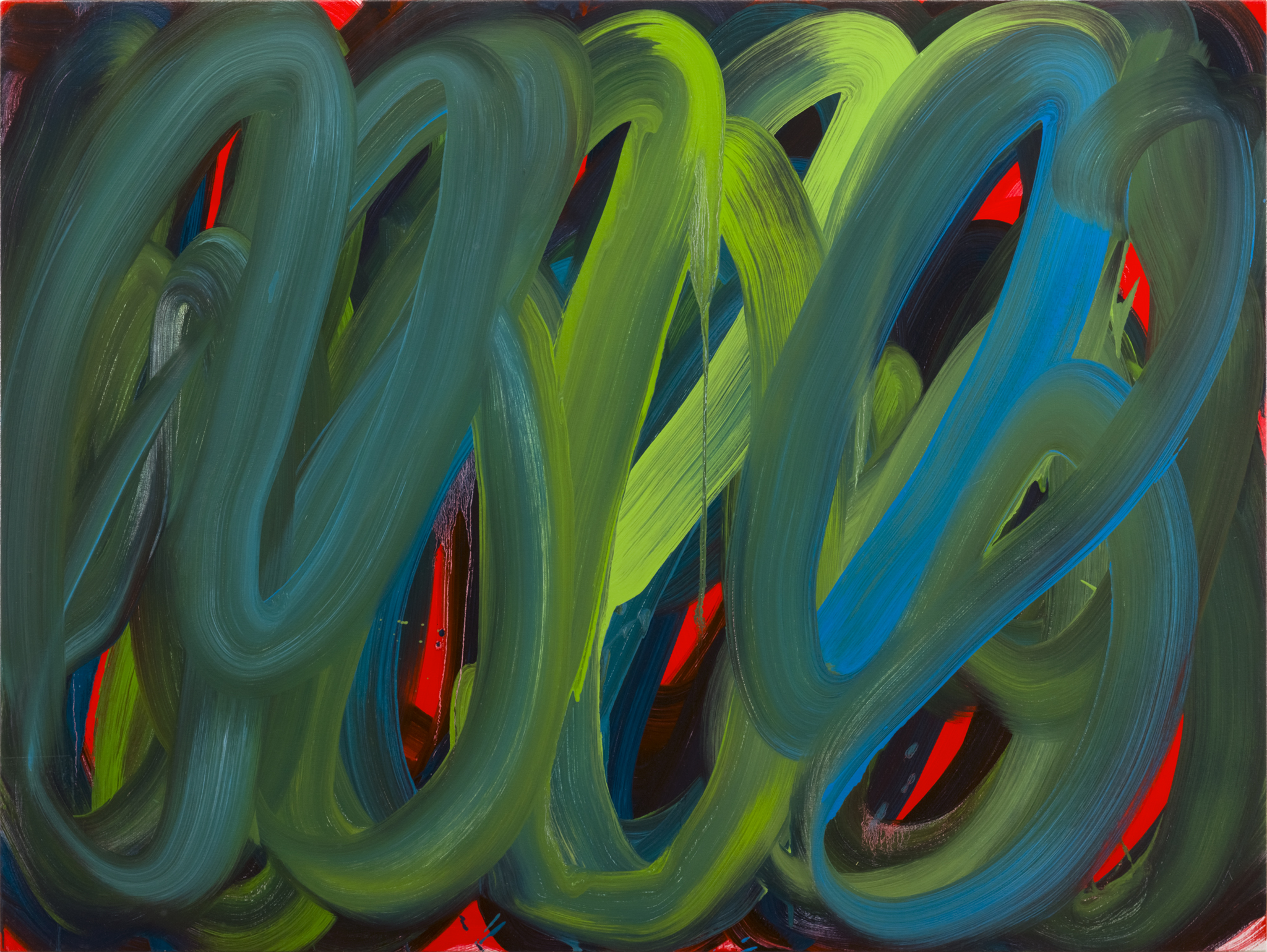 I am interested in exploring the materiality of colour. I do this through engagement with my body, my brushes and paint pigment. I am inspired by the notion that a painting is more than an image, that it is a presence. In pursuing a material-based logic, I work in a co-operative relationship with my studio materials and tools rather than dictating from above what they should do according to theoretical concepts.

My paintings are drawn colour and are a choreographic record of my body’s movement. My gestures bump up against the edge of the picture plane and move with a consciousness of it. The brush width is expressed, as it is— a ready-made. My brushes are not inert tools but are a dynamic medium through which the pigment is transmitted.

There are many qualities of colour that are not visual, based in the materiality of the paint and pigment properties: particle size, oil content, opacity or transparency, thickness or viscosity, finish (shiny or matte). These material qualities are essential in achieving the visual phenomenon of light in a painting. My knowledge of pigments or the thingness of colour has helped me to achieve the qualities of light that I want to describe.

My realization that colour is matter, with intrinsic material qualities interdependent with myself, has provoked me to consider all elements of my studio in a similar way. I see myself as a facilitator in the studio working with, rather than over, non-human agents in my studio. My activity, tools and materials are all equal players in a matrix of dynamic matter.

Colour is never just colour in my work. It is always attached to the physical whether that is my body, my brushes or the paint. Working with the materiality of colour has led me to consider all of the non-human elements in my studio in a new and equitable way.

oil on canvas over wood panel

My work is focused on the materiality of colour explored through physical engagement with my body, brushes and artist pigments. Raised on a Canadian farm, my early perceptual experiences were shaped by the expansive light and space of the prairie landscape.

I was awarded scholarships to attend the University of Saskatchewan in Saskatoon where I completed a Bachelor of Arts and graduated with distinction, having majored in studio art. I also received the Victor Colleaux Scholarship at the University of Saskatchewan. I then completed a Bachelor of Environmental Studies at the University of Waterloo School of Architecture in Waterloo, Ontario. My final architecture project was included in a group exhibition on suburban planning and design at the Mississauga City Hall, Mississauga, Ontario.

My painting career was launched with a solo show at The Canadian Consulate General in Chicago in The Maple Leaf Gallery — the youngest Canadian artist to be featured there. Since then, my work has been shown in solo exhibitions at The Community Arts Council Gallery in Vancouver, British Columbia, The Prince George Art Gallery in Prince George, British Columbia, and the Yukon Art Centre in Whitehorse, Yukon — as well as group exhibitions in Canada, the United States and Europe.

In 2013, my essay “Lyotard’s Dance of Paint” and a number of my paintings were featured in Rewriting Lyotard: Figuration, Presentation, Resistance, a special issue of Cultural Politics (Peter Milne editor, Duke University Press). In 2017, my painting “Matrix 16” was featured on the cover of Differences: Rereading Beauvoir and Irigaray (Emily Parker and Anne van Leeuwen editors, Oxford University Press).

In 2018, I was awarded a Merit Based Artists Grant by the Vermont Studio Center and attended a one-month artist residency there in February. In 2019, I was accepted as a VCCA Fellow and attended a one-month artist at the Virginia Center for the Creative Arts in Amherst, Virginia. That year, I was also accepted to be a member of The Painting Center’s Art File Gallery (NYC) and my work was featured in Art on Paper, a group show at Site:Brooklyn Gallery, Brooklyn, NY.

In January 2020, I attended the Leighton Artists Studio program at the Banff Centre for Arts and Creativity where I completed a one-month independent artist residency in the Gerin-Lajoie Painting Studio. I was awarded a Project Assistance for Visual Artists grant by the British Columbia Arts Council and a Research and Creation Grant from the Canada Council for the Arts in support of this residency project.

In September 2021, I attended the International Painting Symposium “Mark Rothko 2021” at the Daugavpils Mark Rothko Art Centre in Latvia. This Symposium included publicity opportunities (an artist talk, information in mass media, and open studios) and a Symposium group exhibition with a printed catalogue. Five of my paintings (created at the Symposium) were accepted into the Centre’s permanent collection.

I currently live and work in Vancouver.